Sakai is one of the three great knife and bladed tool producing regions in Japan. The knives individually hand-forged by craftspeople are particularly famous, boasting a domestic share for use by professional chefs of 98%. Their incredible cutting edge, coupled with the massive boom of Japanese cuisine, makes them the focus of attention even for the chefs from around the world are now also taking notice of these special blades. What are the secrets behind the high quality possessed by Sakai knives? What is the appeal in actually traveling to Sakai to make a purchase? Here’s an introduction to the basics about the hot-topic of Sakai knives.

The knife industry in Sakai boasts a history of more than 600 years. Its beginnings lie in the 15th century, when a group of knife blacksmiths descended from swordsmiths moved from Kaga Province (modern day Ishikawa Prefecture) to Sakai. However, the foundations of the industry can be found back in the 5th century, nurtured by the construction of the largest burial mound in Japan, the Nintoku-Tenno-Ryo Tumulus. A group of craftspeople making iron tools such as hoes and plows took up residence in Sakai and further expanded forging technology.

The opportunity to greatly expand production came in the 16th century. When guns and tobacco arrived in Japan from Portugal, Sakai flourished in the production of guns making use of knife forging techniques and tobacco knives used to cut up tobacco leaves. The sharp tobacco knives were particularly prosperous, even going so far to achieve a monopoly during the Edo shogunate (the samurai government during the 17th - 19th centuries). During the Genroku era (end of the 17th century), the single-edged style knives that remains a characteristic of Sakai knives was born in Sakai. These traditions have been passed down to the present day, with the domestic share for Sakai knives used by professional chefs standing at an incredible 98%.

There are two kinds of knives - those that are hand-forged by craftspeople, and those that are mechanically produced by punching out the shapes using a molds. Sakai has grown to excel at the former of these two. A technique called “forging” is used, in which the soft iron or steel from which the knife will be made is heated until it becomes red hot and then beaten and stretched out using a tool such as hammer etc. This beating process increases the density of the interior of the metal, heightening its strength and toughness to produce the ultimate cutting edge, durability, and incredible beauty.

Hand-forged knives are in principle the same as Japanese swords, with a single-edge. This is considerably rare, with double-edged being the norm around the world, and the blades have an acute angle and incredible cutting edge. The cut plane of the ingredients is also beautiful and smooth. These knives can cut even extremely soft ingredients such as sashimi without damaging their fibers or cell membranes, which help to retain the umami of the ingredients while also preserving their texture. The fact that the blade easily moves away from the cut ingredients is also very functional. Japan is a country in which culinary culture has developed centered in fish and vegetables rather than meat. The unique shape of these knives has surely developed in order to allow such fresh ingredients to be eaten without damaging their flavor. The hand-forged knives of Sakai are currently a Minister of Economy, Trade and Industry designated “traditional craft.”

Knives created using hand-forging techniques are works of art formed by fire, steel, and water. The process is broadly divided into three stages - forging, sharpening, and attaching the handle. It is also characterized by a division of labor, with each step being performed by a professional in that area. With each craftsperson honing their own particular techniques, an overall level of quality is maintained that no other producing region can hope to match. 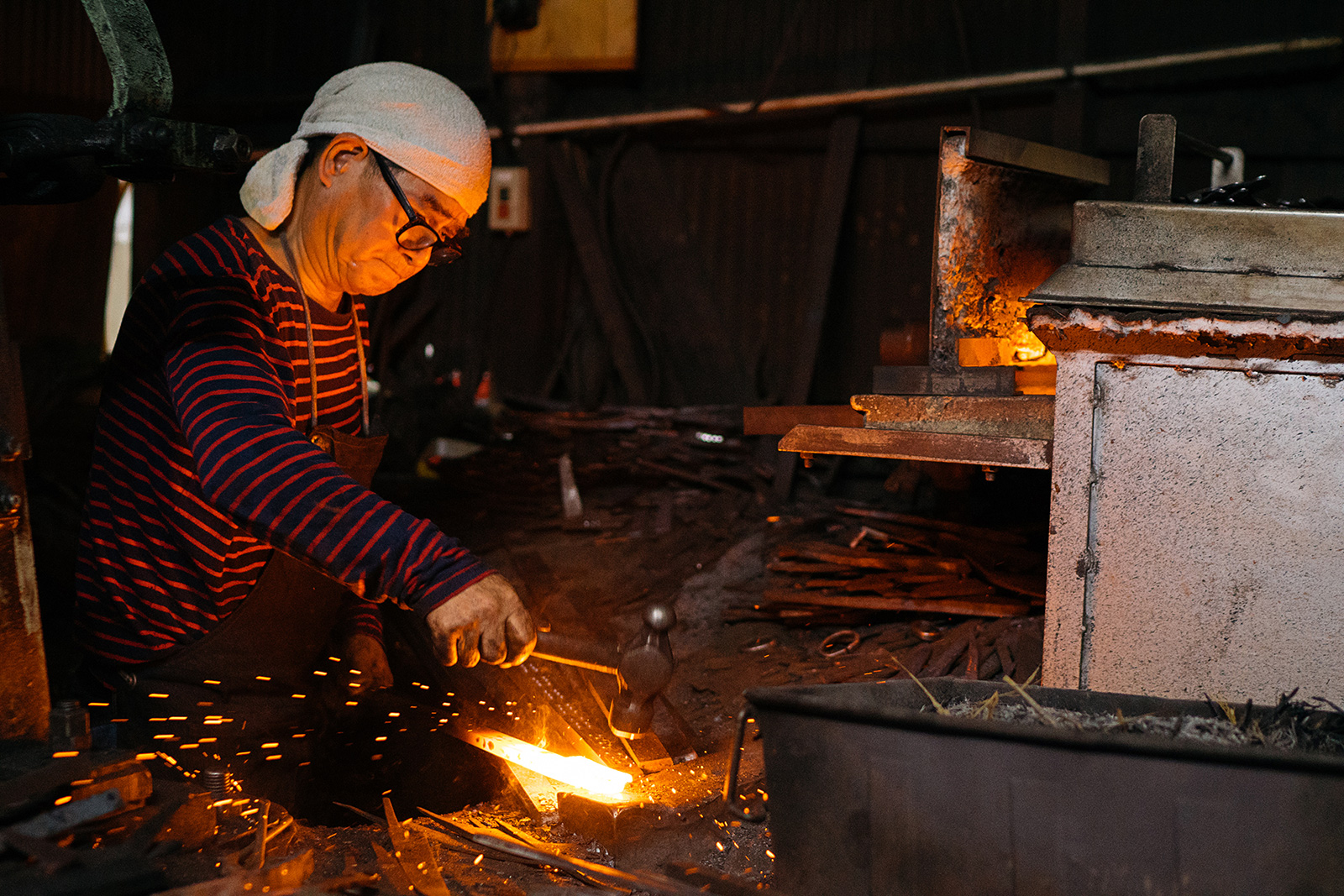 This is the process of hand forging the material iron and steel by the craftsperson. Forging refers to tempering of metal.
The materials are heated red hot inside blazing fire, and then a hammer or power hammer is used to beat and stretch them.
In order to provide the blade with both strength and ductility, generally hard “blade metal (steel)” and soft “base metal (soft iron)” are used attached together.

Placing the blade metal (steel) over the base metal (soft iron) heated in a forge to approximately 1000 degrees Celsius and beating them together attaches the two metals to each other.

The metal is returned to the fire and then beaten out again multiple times, to form the basic shape for the knife.

Pointing and creating the tang

While beating the knife using a power hammer, the base metal and blade metal are further worked together.

After the shape of the knife is formed, it is reheated in the forge, and while being beaten out again the part to be inserted into the handle (called the "tang") is also formed.

The knives are again placed in the hot forge, and then rapidly cooled in water, heightening the hardness and cutting edge of the blade metal. This step is called quenching.

Then the cooled knives are heated in the forge again, bringing toughness to the blade metal and making it resistant to chipping. This step is called tempering.

Temperature control is vital in both the processes, and the master craftspeople tell the optimal timing by the color of the fire. The photo on the right shows the completed form of the forging process.

Sharpening craftsperson then take over, performing the sharpening and polishing processes that make the knife blade sharp.

First rough sharpening is performed, during which the surface of the blade is sharpened using a rough grindstone, thinning down the thickness of the blade and forming the final shape.

After advancing the sharpening of the flat surface, then comes the main sharpening to sharpen the blade, and then the rear sharpening that thinly sharpens the reverse surface.

After finishing with a fine grindstone and applying a rust-preventing oil, the piece is passed on to the next craftsperson for the attachment of the handle. 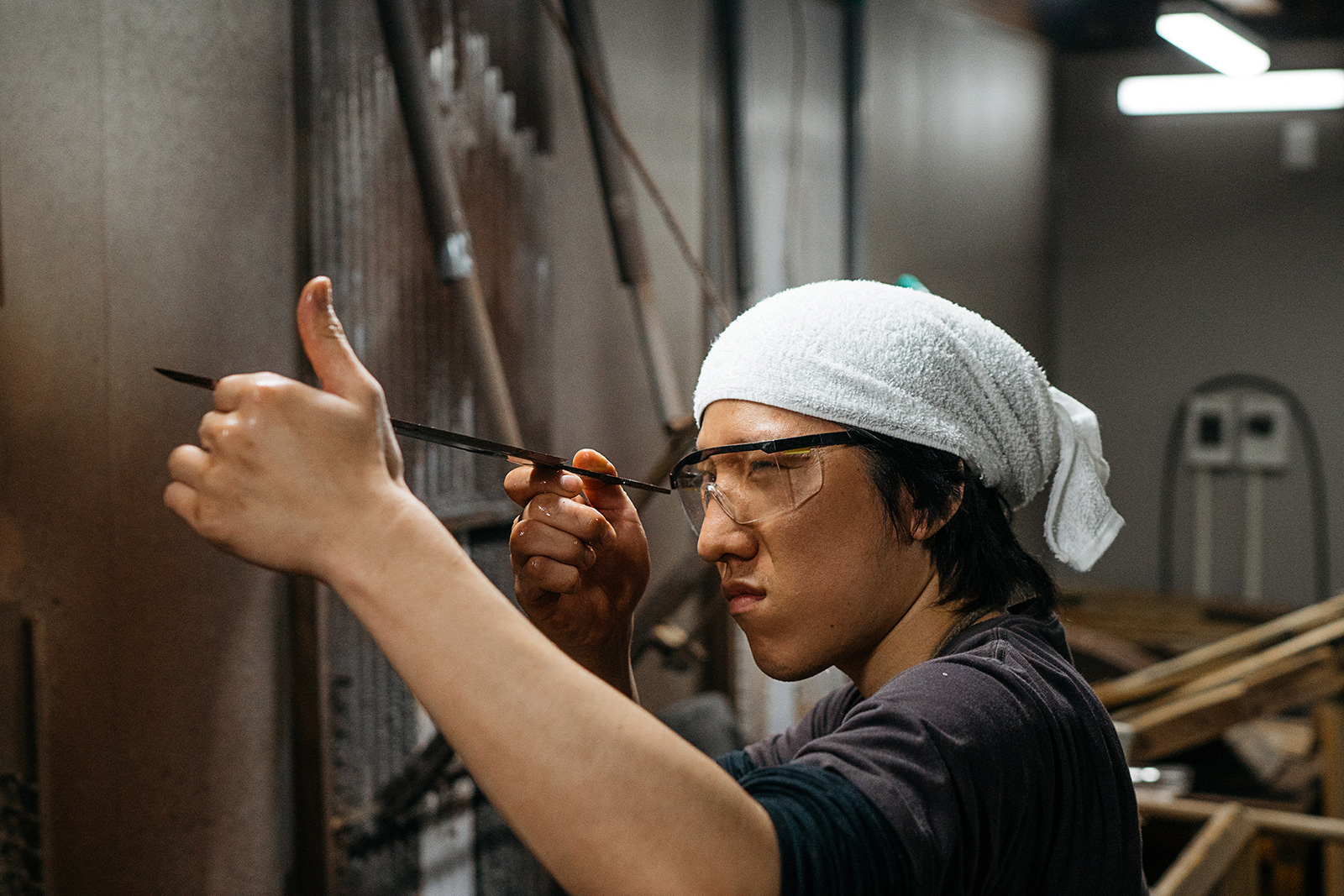 Minute adjustments are made at each stage of the process in order to ensure that no warping occurs.

Once the blade has been sharpened, the final process is to attach the handle. After suitably heating the inside of the handle or the tang on the knife, the tang is inserted into the handle.

Tapping the bottom of the handle with a wooden mallet causes the blade to naturally go into the handle.

Inserting the blade perpendicular to the handle with a perfectly balanced center of gravity is where the skills of the craftspeople really shine. 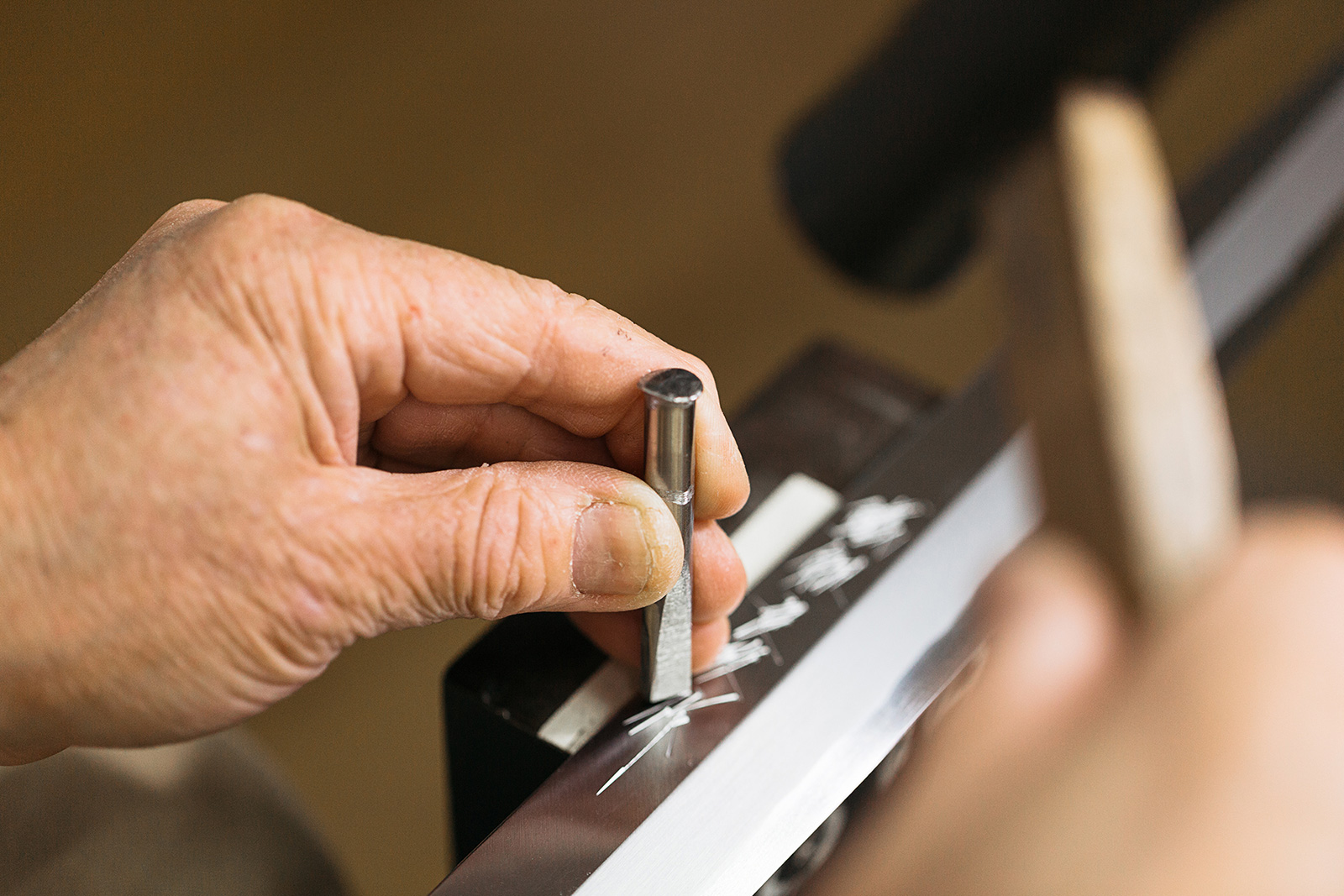 After multiple checks and adjustments, finally a hammer and chisel are used to engrave the brand name, which completes the Sakai knife.

Three reasons to visit Sakai, the city of knives

Knives made in Sakai have become famous both across Japan and overseas. Due to that fame, while they can also be purchased from places outside of Sakai, there are plenty of merits and appeals that can only be encountered by paying a visit to their home in Sakai. For example, you can meet the craftspeople responsible for making the knives, and learn more about the history and culture behind them. Here is an introduction to three great reasons to visit Sakai yourself.

Reason (1)
The Sakai Knife Museum “CUT”, where you can look, buy, and learn.

Tourists visiting Sakai from overseas have heaped praise on the Sakai Knife Museum “CUT”, the best place to learn everything about Sakai knives. Here exhibits the history, production techniques, and tools to make knives in Sakai. You can find practical examples, models, and illustrations on display.  After learning Sakai knives, there is also a shop named TAKUMI SHOP: Knives and Whetstones in the first floor. You will find a rich variety of knives, ranging from those for home use to professional chef glost-fired (100% steel) knives. Varieties of hand-made knives made by artisans are also extremely appealing. There are also permanent staff skilled in English, which makes things easy for the visitors from overseas too. As well as support for finding the “ultimate knife” that perfectly meets purposes and needs of the user, the staff will also provide polite advice about maintenance.

Sakai Knife Museum called “CUT” is in the second floor. If you read QR code, you can find each explanations in English, Chinese and Korean.

Easy to understand with samples and 3D models. You will be surprised by the varieties of knives.

Display the belt hammer which was actually used by blacksmith.

Shopping at the first floor “TAKUMI SHOP”. Whetstones for maintenancing knives are also on sale.

Get a recommendation for the optimal single knife for you, based on your desired use and budget, from pieces made by more than 20 different studios. The cutting edge of a knife hand-forged by Sakai craftspeople is incredibly sharp. If carefully cared for, you will be able to use it for the rest of your life. Please feel free to as for any details. 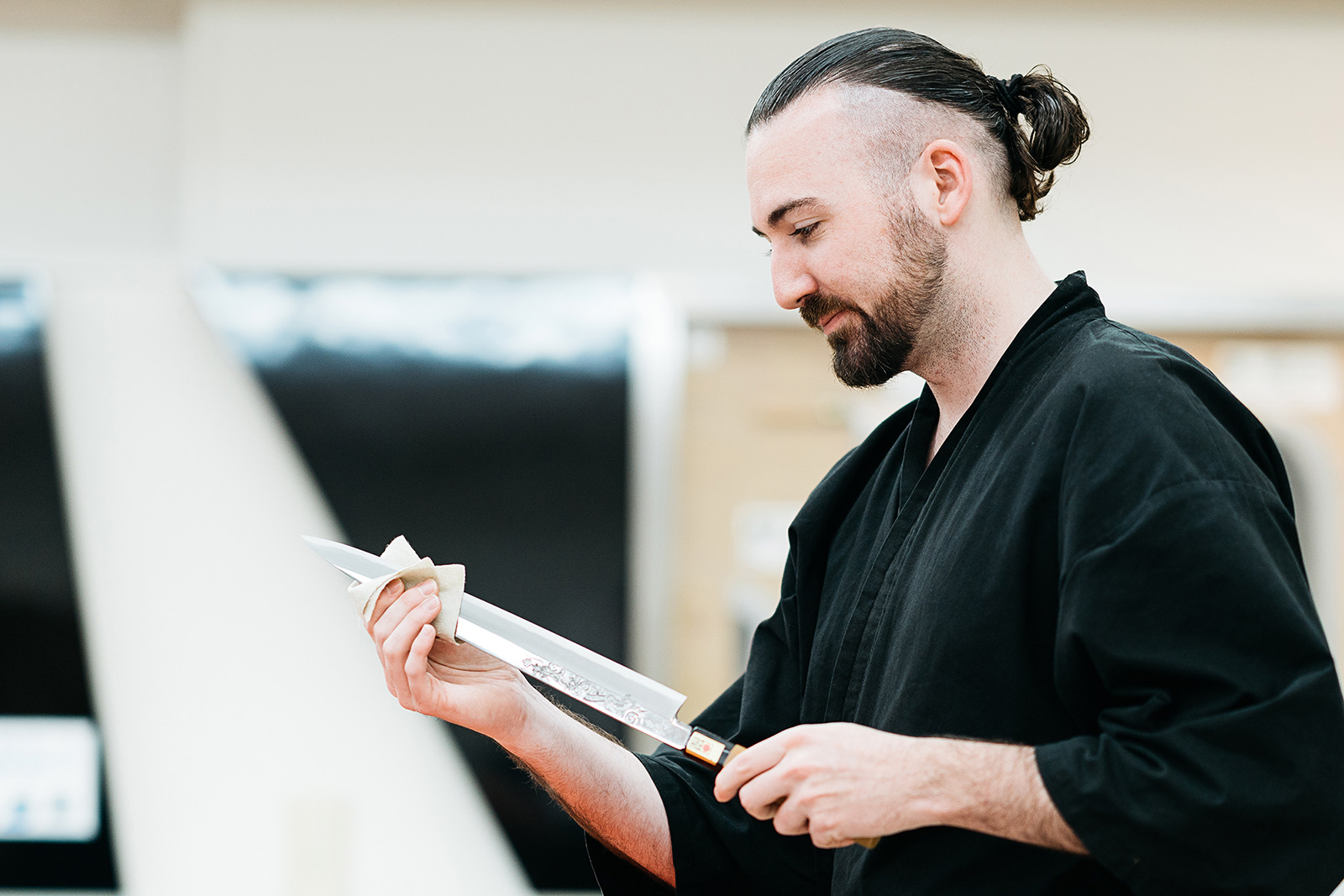 Reason (2)
There are so many knife shops and studios in the street, including spots were you can experience making a knife for yourself.

Knife making in Sakai has a long history, the majority of which developed centered around the area now known as the “old city” (Sakai-ku, Sakai). This place remains the home of many knife studios and wholesalers even today. Some also have a small retail store attached to the premises for welcoming tourists inside, and some even offer the option to have your name carved onto the purchased knife. There are also exhibits of materials and tours of studios, as well as places offering knife making and sharpening experiences, meaning you will never run out of things to see. As all of these activities involve directly visiting the studios, another happy bonus is that you get to directly interact with the craftspeople and staff who work there. Being able to talk about where they placed their focus and their feelings behind each knife will surely only enhance your attachment to the one that you finally purchase.

Reason (3)
There are also studios making "Japanese shears", an item highly desired by gardeners across the world.

Knives are not the only things hand-forged in Sakai using these techniques. Japanese shears, used by gardeners and those specializing in the care of trees, are another bladed item produced in the city. Indeed, you can also find the studio of Yasuhiro Hirakawa in Sakai, the only person in Japan to be designated a traditional artesian for the production of shears. The creation of these unique shears with their two peculiar curved propeller blades is characterized by the requirement for many delicate adjustments during the work, meaning that approx. thirty steps process, from forging to sharpening, is performed by a single person. With a prior reservation you can even take a tour of the studio, including on certain days when viewing the incredible roaring, sparking forging process is also possible. You can also test out the finished product's cutting edge for yourself, which is so sharp to have made French rose gardeners swoon.